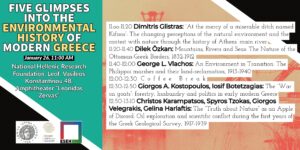 When: 26 January 2022, 11:00 AM
Where: National Hellenic Research Foundation
Online: Registration at this link.

Dimitris Glistras – “At the mercy of a miserable ditch named Kifisos”: Athens’ main river natural riverbed as an antagonist to the city’s 20th century urbanization
The Kifisos river is the main river of Athens. Until the mid-1970s and the rise of green thinking, its natural flow, along with plentiful rainfall, were considered responsible for the disasters that many floods caused. Since the middle of the 19th and until the last decades of the 20th century, the Kifisos was thought as an enemy of progress and a obstacle to the residents’ desire for a western type modern urban lifestyle.
In the suggested article I will examine the changes in the riverbed of the Kifisos that took place in the last decades of the 19th century and the in first half of the 20th century. Through these changes, I will study whether the emerging urban culture included a new perception of the natural environment.
“[Images of shame of a pathetic state, which has been humiliated by a miserable ditch like the Kifisos”; this was the caption underneath the photos accompanying the main article in the Newspaper ‘dated 24/11/1934. Just a few hours before the printing, a flood of the Kifisos resulted in the death of 10 people, the destruction of 1.500 houses, and severe damages to equipment and raw materials that belonged to riparian industries. Catastrophic floods had also occurred before (The Saint Philip’s flood on 14th November 1896 and another on 6th November 1899), and some more were to take place in the remainder of the 20th century (1949,1961 and 1972). Furthermore, during the first decades after the proclamation of Athens as the capital of Greece, many accused the Kifisos’ natural riverbed of housing standing water and being a source of diseases like malaria.
The Kifisos changed along with the city of Athens. During the first decades that followed the founding of the Greek state, Athens’ spatial growth was relatively even. This was interrupted by the arrival of hundreds of thousands of refugees that came from Asia Minor in the 1920s. The Greek state, using mainly international funds, created settlements by the river and elsewhere to house a great number of refugees. Meanwhile, plants and cottage industries settled by the Kifisos as well. Like the rest of the region’s natural environment, the river gradually became part of an urban landscape, in which every geographical site had to serve the financial priorities of the growing city. Hence, the pressure for the Kifisos to become what Cioc described as a “water machine and not a complex of the natural environment” increased .
The idea of straightening or “correcting” riverbeds already existed in central Europe, before the Greek state used the idea to arrange the Kifisos. It seems it was first described by the Italian engineer Gugliolmini in 1719. The concept was to canalize rivers to flow gently from their source to the estuary, minimizing standing water, and deepening or widening their riverbed to avoid any possible overflow.
The Greek state undertook such large-scale projects in 1900, 1936, between 1961-1964, and after 1972. Through the projects, the Kifisos’ riverbed was straightened, deepened, and widened. The usual official calling on “public health” and “safety” in order to get the budget of the works approved, seems to be better explained by the poor financial position of the Greek state, than by any kind of environmental awareness.

Dilek Özkan – Mountains, Rivers and Seas: The Nature of the Ottoman-Greek Borders (1832-1912)
This paper examines the Ottoman-Greek borders (1832-1912) from environmental history perspective. The first Ottoman-Greek borders were determined based on ‘natural borders’ concept, rather than demographic or national claims. It was a concept pushed by the European representatives to find a suitable place which would be a ‘natural’ barrier, at the same time would satisfy the demands of both sides, i.e. Ottoman and Greek. Determining borders based on natural features was not a new phenomenon. There have been many borders in Europe’s history based on ‘natural’ border or frontier concept. For instance, the river Danube has been used as border between several states, empires for many centuries. Also, the French and Spanish land borders in Pyrenees Mountains since 17th century divides two nations. The examples easily can be multiplied.
While fixing a border based on a natural/geographical features, – mainly mountain chains and rivers, but also forests, meadows- agreeing parts generally determine the terms on locals’ access and exploitation of natural resources as it would be restricted after the demarcation of the borders. In our case, however, the usage of the natural resources was not specified on paper, which created several conflicts between two states. Therefore, focusing on the Ottoman-Greek borders in Thessaly and Epirus regions, I will first describe the border region, designating its geography, demography and natural resources, then I will explore the impacts of borders on locals’ lives in terms of their accessibility and usage of natural resources. Based on archival documents of Ottoman, Greek and European states (mainly Great Britain), I will bring to light issues that raised by the locals and how they were solved by themselves, or why and when they escalated these issues to the higher state authorities, which mostly resulted in major conflicts. I will highlight also how demarcated borders and restriction of access to water resources, forests and pastures, had caused serious economic problems for locals. In general, this study will have a bottom-up approach, thus it will aim to understand how the daily lives of the people living dependent on natural resources were affected from the borders, or put it differently how the locals perceived the borders will be my main purpose to explore.

Christos Karampatsos, Spyros Tzokas, Giorgos Velegrakis, Gelina Harlaftis – The “Truth about Nature” as an Apple of Discord: Oil Exploration and Scientific Conflict during the First Years of the Greek Geological Survey (1917-1939)
Geological Surveys are large state agencies of geological exploration that emerged in many European countries, the U.S. and Canada since the early 19th century. Their main function was government-subsidized subsoil exploration. They thus constituted “an appealing prospect to capitalists, geologists, and the state alike”.
Although the Greek geological community remained in a nascent state during the 19th century, the idea of the creation of a Greek Geological Survey can be traced back to the 1890s. Such plans gained momentum and eventually came into fruition during the “war decade” between 1912 and 1922. Indeed, before the Balkan Wars were actually over, Greek geologists began arguing for a “thorough scientific exploration of the new lands”, that could only be realized through the establishment of a Greek Geological Survey. Timely as they were, such pleads did not fall on deaf ears. In fact, between 1917 and 1926, one can find two discrete “Greek Geological Surveys” operating in parallel under the auspices of two different ministries. Unsurprisingly, the parallel existence of these two agencies was marked by constant scientific and institutional conflict, reflected in a long standing personal feud between the two agencies’ directors, the prominent Greek geologists K. Ktenas and G. Georgalas. At the same time, this conflict produced concrete scientific “facts” regarding the newly-acquired Greek territory.
This paper focuses on the production of one such “fact”, namely the existence of oil deposits in the “new lands”. Interest in this new energy source was probably triggered by the involvement of Greek diaspora entrepreneurs in Russian Black Sea Oil trade since the late 19th century, and intensified after 1910 and the British Navy’s transition from coal to oil. Beginning in 1919, the two Greek geological agencies approached oil exploration with divergent scientific methodologies and contrasting mindsets. Ktenas’ systematic approach and his belief in the power of ‘theory’ to solve practical problems, led him to a reluctance to admit the existence of exploitable oil deposits inside the Greek territory. This attitude came into sharp contrast with Georgalas’ enthusiasm, and relations with companies’ executives and policy makers. As a result, Georgalas eventually prevailed; in 1926 he became the first director of the unified Greek Geological Survey, and was one of the most prominent Greek oil experts during the various fruitless oil exploration efforts that took place between 1920 and 1939.
It has been argued that even among scientists, “he who is able to translate others’ interests into his own language carries the day”. Our paper approaches such an effort of “translation” as an historical process. The protagonists of our narrative tried to “translate” what they called “the general interest of the state” into their own geological language. As parallel conflicting efforts of “translation” took place with various degrees of success, significant aspects of “the truth” concerning the Greek territory and Greek “nature” were produced. We aim to show that such “truth” is contingent not only on concrete physical reality, but also on conflict, be it of the scientific, institutional, economic or even personal kind.
Acknowledgement: Research undertaken for this paper has been funded by the project “Looking for Oil in the Greek Territory, 1920-1980” (2020-2021), Foundation for Research and Technology, Institute for Mediterranean Studies, Program: Researcher Support with emphasis on young researchers, Greek Ministry of Development and Investments, European structural and investment funds (2014-2020).

George A. Kostopoulos – The War against the Goats in Greece (1830-1940)
The purpose of this study is to evaluate the environmental impact of goat grazing in Greece and the War against the goats during the period 1830-1940.
Background: In the most countries in the Southern Europe grazing was an old practice since livestock keeping was the main activity that enabled sustenance of livelihoods and shaping the ecosystem of the Mediterranean. Nevertheless grazing is considered as contributing to deforestation. The environmental degradation effects were largely attributed to the goat’s grazing which was viewed as the real culprits in causing deforestation. Since the early days following the liberation of the Greek State from the Ottoman Empire drastic measures were taken to mitigate the effects of overgrazing which was then largely attributed to goats’ grazing. Measures put in place included the reduction or elimination of goats.
The broad objectives of this study will be to analyze the war of goats in Greece during the 1830-1940 period:
• To evaluate the extend of goat grazing in Greece during the 1830-1940 period.
• To determine the role of goats grazing in environmental degradation in Greece.
• To analyse the strategies and policies implemented in the war against goat grazing in Greece.
The primary research question for this study is analyzing the war against the goats grazing in Greece during the 1830-1940 period.
• What was the extent of goat grazing in Greece during the 1830-1940 period?
• What are the roles of goat grazing in the causation of environmental degradation?
• What are the strategies and policies implemented in the war against goat grazing in Greece?
Methods: A systematic literature network analysis (SLNA) of articles indicating the environmental impact of goats grazing and the policy measures used including their effectiveness in the fight against goats grazing in Greece. Strozzi et al. opine that the SLNA provides useful guidance on identifying suitable articles for inclusion in the study. The two phases in the SLNA are carrying out a systematic literature review, official statistics and legislation, parliamentary minutes, newspaper and scholarly articles of the time as well as well as travellers’ memoires, literature that contains information as per the above requirements occurring between 1830 and 1940. while the second phase is the methodology and bibliographic network analysis.
The findings of this study will have significant impact in understanding the role of grazing in environmental degradation in Greece in the 1830-1940 period. Also will be significant in guiding decision making in future as regards to goat grazing and bridging existing gaps and existing literature. Furthermore, the evaluation of the strategies and policies used in the war against goat farming in Greece will be significant in updating the existing body of literature. The literature update is critical as this study inclusion of various literature will increase its reliability and usability. Therefore, this study is significant now and in the future.